Are Scarecrows Just for Crows?

A short history of Scarecrows.

Scarecrows have been around for thousands of years. Although it is a common fall and Halloween decoration, they serve a real purpose. Farmers for centuries have used the scarecrow concept to scare away unwanted birds from their crops. Flocks of crows can scour crops, which can be financially devastating for famers and their families.

Crows aren’t the only perpetrators of crop ruin. Scarecrows also are used to frighten away doves, sparrows, blackbirds and other fowl that love to eat seeds and sugar from corn and other crops. Historically, farmers could go hungry during the winter when birds ate too much of their corn or wheat crop. 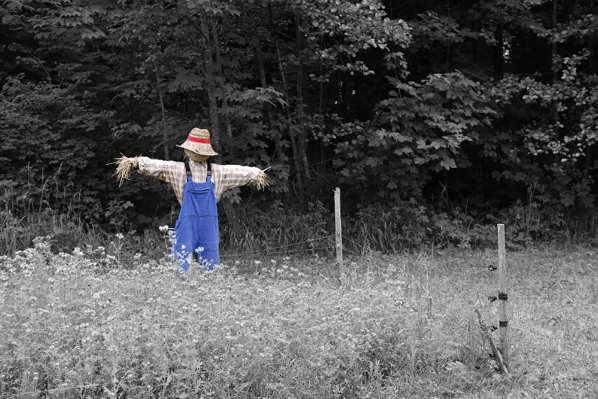 Other names for the scarecrows have been Hay-man (England), Tattie bogie (Scotland), Kakashi (Japan) and  Vogelscheuche (German) to name some. The earliest recorded scarecrows were in Egypt. The farmers in Egypt covered wooden frames with nets to lure quails for dinner. The Greeks would make wooden statues of Priapus in the vineyards to keep the birds away from the grapes. The Romans caught on and introduced the concept to other European countries.

In Japan, farmers used bamboo, dead fish and rags to scare away birds in the rice fields, hoping that the smell would drive them away. In Medieval Britain, young boys were used as live scarecrows, called bird scarers or bird shooers, as they patrolled the fields with bags of stones. They’d sometimes use clappers or wave their arms to ward off the pests. Some Native American cultures also used bird scarers, mostly adult men, who kept watch over the crops. 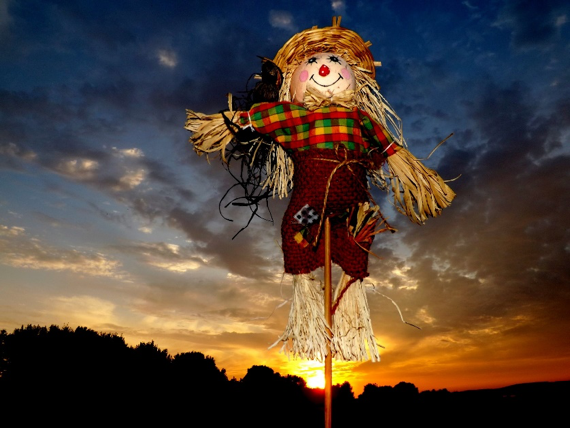 In these modern times, many American farmers have opted for a more technological route using chemicals and mechanical alternatives, leaving the concept of the scarecrow somewhat obsolete. However, that’s not the case in modern Japan, where in some areas of the country you can find scarecrows made from left-over mannequin heads. Either they make them life size or stick the heads on sticks. As the heads are exposed to nature, they can appear somewhat creepy as in this CNN photo for an article.

Whether human, cute or scary, it can’t be denied that the purpose of scarecrows is a timeless necessity where crops are concerned. 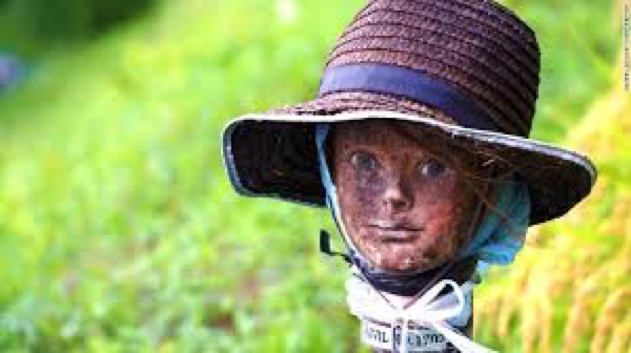