Mining the Mystery of Bigfoot

Legends tell of a huge creature covered in hair, emitting a foul smell and walking on huge feet. In the Himalayan Mountains near Tibet, they are called Yeti. In India, they call them Mande Barung (forest man). In the Pacific Northwest, they call them Sasquatch or Bigfoot. There have been stories and sightings of these creatures for decades throughout the world, and evidence has been gathered to support these sightings — although it has been disputed or disproved. Still, many people want to believe in these unusual creatures, and Bigfoot is one of the most fascinating.

According to the book, “Tracking the Man Beasts” by Joe Nickell, the name Sasquatch was coined by Canadian J.W. Burns in the 1920s. Different cultures and communities throughout the Pacific Northwest had a variety of names for Bigfoot-like creatures spotted in remote forests and he wanted a name for them. “Burns wanted to invent a single term for the alleged creatures … This began a process of homogenization that helped turn various imaginative wild-man concepts into an increasingly uniform type.”

The study of creatures for which there is no scientific evidence is called cryptozoology. This is considered a pseudo-science because it largely relies on anecdotal stories for evidence, and although many cryptozoologists search for true scientific proofs, their standards are not as high as mainstream zoologists. Popular creatures studied under cryptozoology include all the iterations of Bigfoot, as well as the chupacabra, the Loch Ness Monster and living dinosaurs.

People have been catching glimpses of Bigfoot footprints since the early 19th century. Large footprints, usually in snow, were seen as proof of a strange, ape-man in the wilderness. The most common explanation is that these were human or bear prints that were enlarged as the snow melted. Starting in the 1950s, there have been various pictures of distant blurs that are supposedly Bigfoot. 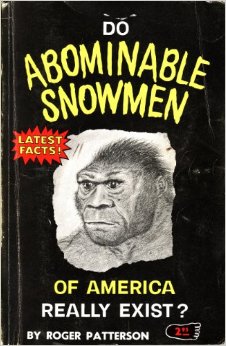 Possibly the most famous piece of evidence is a short film from October 1967 shot by Roger Patterson and Bob Gimlin in a wilderness area of Del Norte County, California, near the Klamath River. Patterson was a Bigfoot enthusiast who has self-published a book in 1966 called, “Do Abominable Snowmen of America Really Exist?” Early in 1967, the two men had begun filming a docudrama on Bigfoot, which is the reason they were carrying cameras into such a remote area.

Most scientists have not been interested in reviewing the film for evidence of Bigfoot. The footage has never been proven to be a hoax, although there are some inconsistencies in stories and timing. A number of people have come forward claiming to be “the man in the gorilla suit,” and there have been several contradictory stories that claim to debunk the video. After Patterson’s death in 1972, a costume and stage prop business owner claims that he sold a giant gorilla costume to Patterson, and later had a phone conversation with him about making it more realistic.

Today, many enjoy speculating and searching for Bigfoot evidence. The Willow Creek – China Flat Museum in Willow Creek, California, has a large, Bigfoot collection that is one of their biggest attractions. There also is a Bigfoot Discovery Museum in Felton, California. In Skamania County, Washington, it is a felony to kill a Sasquatch and it is punishable by a $10,000 fine.

Could Bigfoot possibly be real? In the modern age, with so little wilderness and so many cameras, is it possible that no one would have found definitive evidence by now? There have been creatures that were once considered mythical and were later discovered to actually exist. Some examples are the Komodo Dragon, which was considered mythological until discovered by the Western World in 1912, and the Mountain Gorilla, which has a population of less than 900 today.

Whatever you believe, hunting for evidence of Bigfoot could be a fun excuse to get out and explore some of the beautiful natural areas in Northern California, Oregon or Washington. Maybe you’ll be the one who finally proves once and for all that Bigfoot exists.