Home | Land University | Improving Your Land | Off the Grid: How do you make money?

Off the Grid: How do you make money?

In most cases, it is difficult to make money solely by living off the grid. However, most people that live off the grid have far lower monthly expenditures than the typical homeowner. This is like making extra money because that money that would have been spent on utilities is now available to be saved or spent elsewhere.

Make Money from Electricity
The most glaring way that an off the grid home can make money is by selling the excess power it generates back to the local power utility, if they offer such a program. Once the home’s power systems are in place, the homeowner gets in touch with the power company and requests a bi-directional meter. As long as the utility can reasonably be connected to the home, they will come out and install a two-way power meter. Unlike a conventional power meter found on almost every building connected to the power grid that only spins in one direction and only measures the electricity brought in, a bi-directional power meter spins in both directions and allows for electrical flow both in AND out of the meter.

Additionally, it will calculate the net loss or gain over the course of the billing period. If the home was able to generate more power than it consumed, most likely through a combination of solar, wind or waterpower generation, that excess power would be fed back to the grid. The power utility issues you a credit or payment for that amount of electricity you supplied. It should be noted that not all utilities or states allow this; be sure to check your local laws prior to beginning the process to set this up. 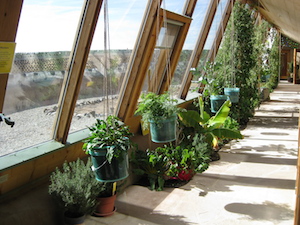 Selling Plants Off the Grid
The next source of revenue could be from the sale of flowers, vegetables and other plants that are grown from fertile beds fed by the gray water of the home. As briefly mentioned in other off the grid blog posts, gray water that goes down the sink and shower drains can be piped through flower beds located inside the home, which in turn can produce lush plants with no extra watering needed. These flowers, vegetables and plants can then be taken to a local farmers market or retail outlets and sold.

Blogging
Everyday more and more people are choosing to live off the grid. With the fast pace of today’s society and increasing workloads, people are deciding to throw it all out the window in exchange for a slower pace. With the off the grid market growing and people needing information, one revenue source for an off the grid homeowner is to write about their experience in a blog. Once the blog begins to garner a following, advertisers can be approached and a revenue stream can be generated through managed ads and crosslinks on the blog. Websites like WordPress.org, Tumblr and SquareSpace make it easy for the non-tech savvy writer to get up and running with a blog in minutes.

Wrap Up
As you can see, there are several ways to make money by living off the grid, and this list is by no means comprehensive. Other options could include a setting up an off the grid bed and breakfast or consulting new off the gridders, among many others. With these ideas in mind, along with the other benefits found in off the grid living, a comfortable, peaceful lifestyle is not too far away.