Tiny homes are all the big buzz these days. Their low cost and compatibility with the minimalist lifestyle appeals to a great many folks. At LandCentral, we had an opportunity to chat with Len Marsh, the owner of findmytinyhouse.com located in Hayward, California. Len builds tiny homes out of shipping containers.

Len spent 25 to 30 years in the Silicon Valley in finance helping startup companies, but he has always been fascinated with real estate, working in various capacities. Because of his experiences with the ups and downs of the real estate industry during 2008 and 2009, Len was inspired to create tiny homes made from shipping containers.

The high cost of living in the San Francisco’s Bay Area is no secret.  Len wanted to offer affordable dwellings and allow people to live in the community. The idea was to build a village or pocket neighborhood, where the cost of living is low in an urban environment. Each community would be made up of a half-dozen to a dozen units, where each inhabitant would have their private space as well as a common area.  A community like this could share economy, similar to zip cars, enjoy communal meals a few times a week, and share resources as simple as power tools. Len’s idea is that this kind of simplicity and sharing would free up time and money for people to do the things they love, instead of working like crazy for a house payment.

According to Len, so much of what our country buys comes in shipping containers, predominantly from China. However, most of the things we sell to other countries do not go in shipping containers. This makes us a net importer of shipping containers that either go back empty, or pile up on the docks.  These containers are relatively affordable. So the idea is to take these 8-by-20 foot boxes, using the Lego approach, and stacking and arranging them into interesting configurations for a home.

In addition to the cost advantage, Len said that the quality of a shipping container is extremely high.  They are designed to withstand the ocean and, therefore, are very durable. Findmytinyhouse.com operates in a factory setting. The construction time is greatly reduced, so purchasers receive their tiny home essentially as a completed unit. 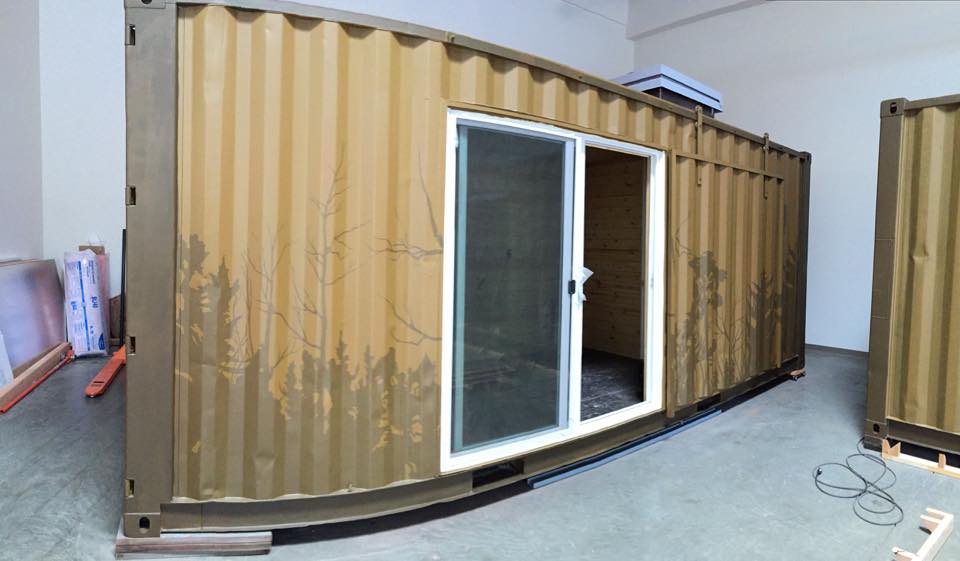 For example, say you want to build a cabin for hunting or as a getaway from the city. Going the stick-built route, the cost can be in the hundreds of thousands of dollars, and building requires so much time. What if you’re not at this spot every day?  All sorts of things can happen while you are away. With a factory-built house, the construction time is reduced and can be delivered on a built foundation.

In addition, Len says, shipping container tiny homes are relatively cheap to heat and cool. It’s also conducive to alternative energy sources, such as solar power.  Keep in mind that microwaves and air conditioners draw a lot of power, so they could potentially drain a battery.  However, many states offer rebates or advantages for solar power installations.

The ideal candidate for a container tiny home

Len says shipping container tiny homes appeal to two types of people: younger and older. Families with three kids, two dogs and a cat, probably wouldn’t want to live in 200-square feet. If you are a single person and don’t have a bunch of “stuff,” wouldn’t it be nice if your rent was half the going rate?  Fast-forward 40 years to when you become a senior, and you’re ready to trade all your stuff for experiences.  What if you could live in your own house, under your own terms, and not be isolated? A pocket neighborhood of shipping container tiny homes would be ideal for seniors.

Also, many people are interested in backyard housing.  Perhaps they want an extra bedroom, an office, or wish to create a space for a family member.  Half of Len’s customers ask about planning a container home in their back yards.

Another type of customer could be someone who wants a weekend retreat or vacation home.  Sure, a person can have a travel trailer or RV, but leaving something like that on a property would leave it extremely vulnerable. Instead of incurring the high cost of a stick built house for about $33,000, that customer can have a complete small, very robust cabin. 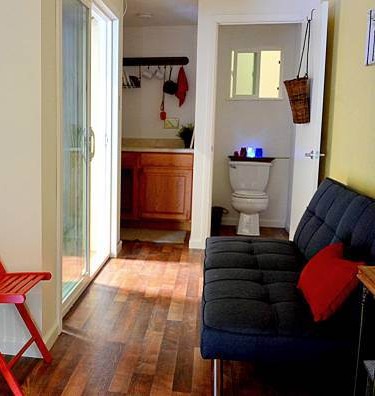 “First, people need to change their mindset; which means that they’ll probably have to cut up their Costco card,” Len said. “People have to decide that stuff doesn’t thrill them, experiences do. Second, I think you need to simplify your life and get rid of all the stuff that just doesn’t contribute to your happiness. And for some of us that’s very difficult.”

But if people can, they’ll gain a certain level of freedom, he said. “If your cost of living is not consuming 40 percent of your take-home pay, doesn’t that give you a lot more opportunity to other things, including not working so hard?”

What is Len most excited about?

Len is excited about the enthusiasm he sees from potential buyers. He’s built two models and people come in to look at them and it starts a conversation about building and living options. That is the fun part for Len, watching the possibilities grow in his customers’ minds. “They have this dream, this fuzzy concept, and they need an anchor,” he said.  “They can imagine that the bedroom and bathroom goes here, or the kitchen and dining can go there, and we can put an open space here. Now they are creating their own space, rather than someone else creating it for them.”

If this type of building or lifestyle appeals to you, check out Len’s container homes at www.findmytinyhome.com.